Unsung Caribbean isle of Ambergris Caye impressed Madonna so much she sung about it.
By: Tracey Thompson 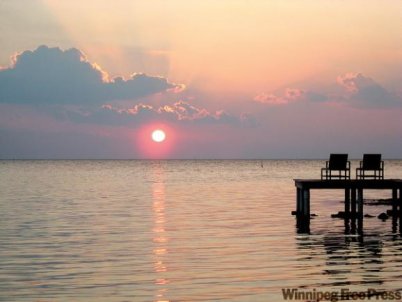 IT’S not hard to see why Madonna sang so longingly about this idyllic island paradise in her 1980s hit  La Isla Bonita. She was writing about Ambergris Caye, a 40-kilometre-long island off the mainland of Belize. San Pedro is the town on this island, which is the most popu­lar tourist spot in Belize, but still home to only about 5,000 people.

The entire country of Belize has a population of only 310,000, compared to over 13 million people living next door in Guatemala. That is part of the charm of this small Central American country. Located just south of Mexico on the Yucatan peninsula, Belize has the feel of a tiny, island paradise. Unlike its northern neighbor, Belize hasn’t capitalized on the tourism industry like Cancun and Cozumel on the Mayan Riviera. 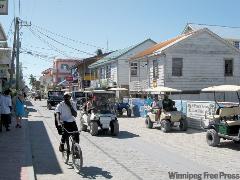 Belize has an almost undiscovered charm. While there are tourists, it still has a natural, laid-back and authentic feel. The people are friendly, the big-name resorts are nowhere to be found and you feel at home as soon as you step off the plane. But Belize is already one of the world’s leading ecotourism spots and it is poised to become an even bigger tourism hotspot.

That’s because Belize has it all. The tiny country boasts the world’s second-largest coral reef, comparable only to the Great Barrier Reef in Australia. For divers and snorkelers, it is paradise. There are more than 200 cayes, or small islands, that dot the coastline of Belize and offer countless opportunities to explore with postcard-perfect white sand beaches and palm trees. Mainland Belize offers lush, tropical jungles with incredible wildlife, winding river systems and hundreds of Mayan ruins scattered throughout the countryside. 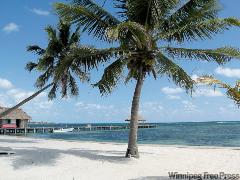 Perhaps Belize is not as popular as other vacation spots because it’s not the easiest place to get to, with only a handful of direct flights to choose from. But getting there is half the fun and most certainly a good part of the adventure. In January, we flew to Minneapolis, spent a night in Houston and caught an early-morning flight to Belize City, the country’s congested capital.

And that’s where the adventure began. Phillip Goldson International Airport in Belize City is a small terminal with half a dozen gates at best. For most tourists arriving in Belize, this is merely a stop along the way. Our final destination was Ambergris Caye, the most developed resort region in Belize. For US$60, you can hop on a 15-minute flight to the town of San Pedro. You can also get to the cayes by ferry for about $20 each way, but the boat ride is 45- to 60-minutes and you have to take a 20-minute taxi ride from the airport to the ferry terminal. 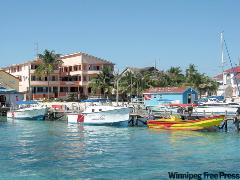 The flight to the cayes is spectacular, if a little daunting. Floating above the blue-green sea in the little, 10-passenger propeller plane provides an amazing bird’s-eye view of some of the 200-plus islands dotting the waters around Belize. It was just slightly nerve-wracking sitting in the small, older plane as it prepared to touch down on the tiny landing strip we could see just below.

The airport in San Pedro is not much more than a dirt patch of land and a small shack. It serves as much as a place for local kids to kick around a ball in between landings as a spot for the local dogs to take shelter from the sun under the handful of small planes. Transportation from the San Pedro airport is in a well-used minivan or by golf cart, the island’s preferred mode of transportation. 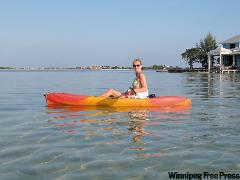 The golf carts zipping around the narrow streets of San Pedro and transporting people up and down the island are just part of the charm of Ambergris Caye. Vehicles have been all but banned and while a few people still drive trucks or other automobiles, the majority of people drive golf carts.

Visitors to Ambergris Caye can stay in anything from a basic, no-frills room on the beach to a luxurious resort and everything in between. But there are no big name resorts here or even chain hotels. There are no towering hotels or sprawling all-inclusive resorts. Even the most luxurious of resorts are quiet, relaxed and fit with the laid-back atmosphere of the small island.

One of the biggest charms of Belize is the people. Despite its small population, Belize is home to one of the most diverse and eclectic populations anywhere. The Belizeans are a unique mix. From the Mayans to the Creoles and Caribbean Rastafarians, Belize is home to all kinds of people, including a large Mennonite community, which now numbers over 12,000. Walking along the beach, you see more locals than tourists. People smile as they pass and wish you a good day. The native tongue here is English, so it’s easy to get by and feel at home.

That feeling of being at home is exactly why so many people come to Belize for a visit and never leave. Former River Heights resident Neil Sullivan fell in love with Ambergris Caye the first time he visited Belize five years ago. Now he is a local and is developing a multi-million dollar housing and hotel project just across the lagoon from San Pedro.

Everywhere you turn, it seems, there is another Winnipeg connection. When I looked into a snorkeling excursion, I discovered I was emailing back and forth with a former Winnipeg cop who policed the Transcona area before relocating to Ambergris Caye to operate a dive boat. We stopped for lunch one day at Portofino, a charming beach resort on the northern end of the island, and met Helda, an animated 30-something who grew up in Winnipeg’s north end. After moving to this charming island with her daughter a year ago, she says she wouldn’t have it any other way and now considers her island paradise home.

Ambergris Caye has a way of casting a spell on its visitors. Perhaps it’s the incredible sunsets that seem to last for hours until the sun literally drops into the ocean or the sea of millions of stars that appear soon after. Maybe it’s the soothing tropical breeze or the soft white sand beaches. The walkway along the beach in San Pedro is fringed with palm trees and every few metres a long dock juts out into the water with a thatched roof palapa crowning the end. It’s a place where you can never take enough pictures to get the one that will ever do it justice.

Belize is as beautiful under the sea as it is onshore. The incredible Hol Chan Marine Reserve is home to thousands of amazing undersea creatures and it is patrolled heavily to ensure the area is protected for generations to come. We spent half a day on a private snorkel trip with Nano, a seasoned Belizean diver who knew just the spots to take us to. Even before we entered the seafoam-coloured water we could see the marine life active right underneath us.

Although I am still petrified after seeing Jaws as a child and still second guess my middle-of-the-lake swims in the summer, I jumped into the warm Belizean water just after Nano pointed out a sizeable nurse shark swimming under the boat. Maybe it was the rush of adrenaline that pushed me in, but it was well worth the fear as we entered an amazing underwater world.

Scores of needle fish and groupers floated in masses as we swam by. Red snappers, angel fish and other creatures provided a wide array of colour. I always find it incredible that what lies beneath is so different from what we see from the surface. Bountiful coral and rock formations and lush plant life added to the diversity of the underwater landscape. The most amazing view was a pair of brown, spotted eagle rays literally floating past us with their wide wing spans.

After close to an hour of snorkeling at Hol Chan, we boated over to Shark Ray Alley. Shark Ray Alley is infamous in the travel guide books. It’s billed as a place where you might just take your life in your hands if you dare enter the bustling waters that the guides bait with small fish to attract the rays and nurse sharks and get them excited. Once again, my adrenaline took over — after I had confirmed with our guide that no one had been eaten in recent history! I entered the shallow waters with the almost tame, large manta rays and even bigger nurse sharks swimming underneath. It was a pretty amazing experience.

Belize is full of charm and experiences. With a growing number of hotels, restaurants and real estate development, the tiny island of Ambergris Caye is only just coming into its own. It is poised to become another hot tourist spot in only a matter of time. While that will bring a whole new dimension to the island, I can only hope that this small paradise will retain some of its laid-back atmosphere that has Madonna and so many other visitors dreaming of coming back.