AMBERGRIS CAYE, Belize – For many Central Americans – a predominantly Pacific-coast oriented population – the Caribbean side of the isthmus has always been considered curiously, if not distantly, as “the other coast.” 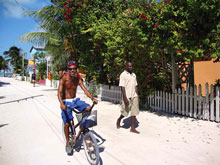 But for Belizeans – Central America’s peculiar English-speaking neighbors who live in a small slice of jungle and beach wedged between Guatemala and Mexico – the Caribbean is the only  coast, and it’s the rest of the region that seems a bit curious.

Since its full independence from Great Britain in 1981, Belize has mostly lived with its back to the rest of Central America, opting instead to identify with other English-speaking island nations of the Caribbean Community (CARICOM).

As a demographic illustration of that point, one needs only to travel across Belize to note that the closer one gets to the rest of Central America, the fewer Belizeans one will find. Indeed, more Belizeans live on the Caribbean island of Ambergris Caye than in the mainland capital city of Belmopan, which, with a population rounded up to 10,000, is the least inhabited capital in the world.

For the most part, Belize has had good reason to stay on the Caribbean side, especially considering how slow the rest of Central America has been in welcoming it to the neighborhood. Guatemala didn’t recognize Belize until 1992, while those with older maps still referred to the country as “British Honduras” years after its independence.

But now that’s starting to change, as Belize begins to embrace some of its neighborhood roots and tries to use its unique geographical situation to its advantage.

“We are Central America, but we are also the Caribbean. So we want to be a Caribbean getaway for Central Americans,” says Sandra van Noord, owner of the stylish beach resort Portofino, on Ambergris Caye.

Chamberlain said that the world economic crisis, which has hit Caribbean tourism markets even harder than Central America’s, has forced the tourism sector to “revitalize our industry” and “start thinking outside the box.”

As Central America tries to promote itself in Europe and Asia as a single, multi-attraction destination, Belize – the region’s most developed, English-speaking Caribbean destination – has a lot to offer the package as a complement to the rest of Central America.

“We can’t keep putting all our economic eggs in one basket and looking toward the United States as our only tourism market,” Chamberlain said. “We need to form new partnerships and collaborations and start looking to markets such as Mexico, Russia, Europe and Canada.”

With daily flights to and from Cancun, Mexico’s largest resort town, Belize can also serve as “a link between Cancun and the rest of Central America,” says Mike Singh, Chief Executive Officer in the Ministry of Tourism. 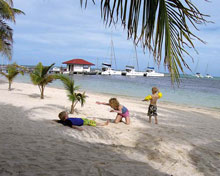 The former heart of the Maya civilization some 3,500 years ago, Belize is home to spectacular pre-Columbian ruins – some of which are so tucked into the jungle they are accessible only by traveling up the extensive Belize River, which starts in Guatemala and winds 180 miles to the Caribbean Sea.

Most of Belize is jungle – over 75 percent of the country is covered in tropical forest, half of which is protected. The jungles of Belize are home to abundant bird and wildlife, including five species of wildcat.

Underneath the jungle lies Central America’s most extensive cave system, providing unique and wild cave-tubing day tours where tourists can float down the river in inner tubes through miles of caves, wearing only a bathing suit and a spelunker’s headlamp.

But Belize’s most famous attractions lie under the crystal blue Caribbean waters. With a 185-mile long coral reef – the longest in the Northern Hemisphere, a world heritage site and one of the seven underwater wonders of the world – Belize is home to some of the best snorkeling and scuba diving in the world.

Amid the waving and hypnotizing coral, electric-colored fish festively festooned in flamboyant striped patterns, dart in and out of their underwater castle playground. Hugging the seafloor like shadows, giant stingrays flap effortlessly beneath the diver as sea turtles nibble on sea grass before darting to the surface for a gulp of air.

Meanwhile, at the extreme edge of vision, a giant nurse shark swishes her tail and moves away into the darker ocean depths.

Skin divers can see a greater variety of sea life during a two-hour snorkeling trip on the reef than they can from a lifetime of watching the Discovery Channel. And it’s all just a 10-minute boat ride off of either Ambergris Caye or the much smaller and cozier Caye Caulker, 10 miles south of Ambergris Caye.

At the end of the day, with one’s back properly burned from snorkeling, it’s back to the hotel for several cold Belikin Beers and a fresh seafood dinner (which, incidentally, feels like a guilty pleasure after a day of making new fish friends on the reef).