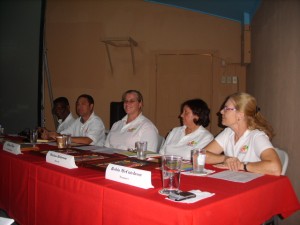 Today I am doing something out of the ordinary and heading to Burrell Boom with Mike. We have a meeting to attend so I booked us a tacogirl special on the 7:am Tropic Air and away we go. Nothing like a plane ride over the Caribbean Sea to start your day right.

The BHA 2010 Biannual AGM was both educational and productive. Attending the meeting gave Mike and I the opportunity to meet the board members and learn more about the BHA and their mission as well as explain the new website concept to them and answer questions. The Belize Hotel Association board is composed of a strong group of people who are results driven and very focused. The board members are all local business owners who volunteers  by choice because they believe strongly in what they are doing and it shows.

Through increased yearly participation in trade shows abroad the BHA is building a strong presence for  Belize within the travel industry. I thought it was great that they have included information in  a few other languages within their Belize literature. This allows for people in other countries to learn more about Belize in their native tongue and shows a willingness of the BHA to cater to different markets.

The Belize Hotel Association has a very solid marketing plan and with their ongoing participation in Travel and Tourism trade shows and the numbers they are getting show clearly that their marketing plan is working. During the presentation BHA were able to show how tracking traffic on the BTB website showed  increased visits from a specific location as a result of being at a trade show there.

It was very inspiring to learn more about the  Belize Hotel Association’s goals and how they have been continuing to develop their relationship with the Belize Tourism Board in order to create a united vision for Belize.  The two groups have been working hard together to benefit Belize and expand our country in the tourism and travel market. The  BTB has been generously helping the BHA with ongoing funding and this shows that the BTB believes in what the  the BHA is doing and is willing to work together and build something solid.

I have always believed there is enough pie for everyone and in listening to board members of the BHA speak it is clear that they are really working hard to put themselves out there with the goal of knowing that success for any of their members is a success for the team. They have future plans to give members training so that everyone is able to understand and read their statistics and be able to qualify that the hard work is paying off in the form of visits to websites and bookings for it’s members. The saying strength in numbers holds true here and the Belize Hotel association is proof of that.

BHA’s Board of Directors: