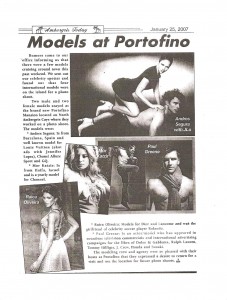 Rumors came to our office informing us that there were a few models cruising around town this past weekend. We sent out our celebrity spotter and found out that four international models were on the island for a photo shoot.

Two male and two female models stayed at the brand new Portofino Mansion located on North Ambergris Caye where they worked on a photo shoot. The models were:

* Mor Katzir: Is from Haifa, Israel and is a yearly model fro Channel.

* Raica Oliveira: Models for Dior and Lancome and was the girlfriend of celebrity soccer player Rolando.

* Paul Greene: Is an actor/model who has appeared in countless television commercials and international advertising campaigns for the likes of Dolce & Gabbana, Ralph Lauren, Tommy Hilfiger, J. Crew, Honda and Suzuki.

The modeling crew and agency were so pleased with their hosts at Portofino that they expressed a desire to return for a visit and use the location for future photo shoots.